Last October different law enforcement agencies orchestrated a takedown of the Dridex Botnet. However, the threat actors behind Dridex spam runs seem stronger than ever. The resurrection of Dridex after the announced take down has been ferocious. During the last Black Friday in our spam traps we observed at least four different phishing campaigns delivering Dridex. Each campaign was carefully crafted in order to lure the users to open the malicious documents. The creativity of the threat actors is captivating. The below picture illustrates one of these emails that is supposedly sent from the well-known rent-a-car company AVIS. The email contains a Microsoft Office document attached that contains malicious macros on it. 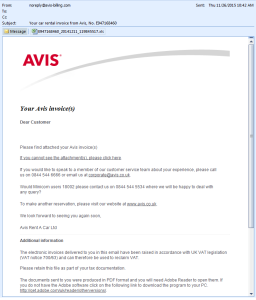 Across all the campaigns the technique is the same. All the Microsoft Office documents contain embedded macros that download a malicious executable from one of many hard coded URLs. These hard coded URLs are normally collateral victims of the operation. The encoding and obfuscation techniques used in the macros are constantly changing in order to bypass security controls.

Normally these URLs are hosted under legitimate sites that have been compromised to host the malicious file. When the macro is executed it will fetch a second stage payload from the compromised server. This payload is then saved to C:\Users\%%username\AppData\Local\Temp and then executed.

After the machine gets infected Dridex will start beaconing out to the C2 addresses. Dridex uses HTTP to encapsulate the traffic and encrypts the payload. Below an example how the first HTTP POST request made by the infected machine looks like in the network. A POST to the root folder full of gibberish.

From this moment onward the malware is capable of stealing all kinds of credentials from the victim’s computer. It can also redirect victim’s traffic to sites controlled by the threat actors using man-in-the-browser functionality. This allows interception and manipulation of traffic that is supposed to be delivered to legitimate sites. Dridex has remote access functionality that allows the threat actor to connect to websites trough the victim computer.

Phishing campaigns that distribute commodity malware are common and ongoing problem for end users and corporations.E-mail continues to be the weapon of choice   for mass delivering malware. The tools and techniques used by attackers  continue to evolve and bypass all the security controls in place. From a defense perspective, the US-CERT put together excellent tips for detecting and preventing this type of malware and to avoid scams and phishing attempts applicable to home users and corporations.

There are two main motives involving the usage of botnets causing them to emerge and evolve. On one hand, there is the motivation to pursuit political ends using bots for example to initiate DDoS attacks. This is known as hackitivism. On the other hand, there is an economical incentive to use and exploit bots for spam, phishing, DoS extortion and other attacks. These two avenues make a strong incentive for the bad guys. Traditionally the attacker’s motivation was self-fulfillment, fun and proof of skills. However, the motivation is leading into business models that involve building, exploiting and maintaining botnets. In addition to the motivation, the methods used are also progressing. The distributions of the tools that allow infection, propagation, management and exploitation of the bots have been industrialized on IRC networks. The bot infection process has become more automated [1][2].

So, if the attackers have the motivation. Which methods are they using? How do attackers infect new bots/Zombies? Which tools are they leveraging?

One of the methods used in the bot infection process is exploiting bad passwords. During the course action of using a medium interaction honeypot, it has been observed daily brute force attempts against SSH.

The following diagram illustrates the step-by-step infection process of new bots exploiting bad ssh passwords. This process is explained in the enumerated list below. 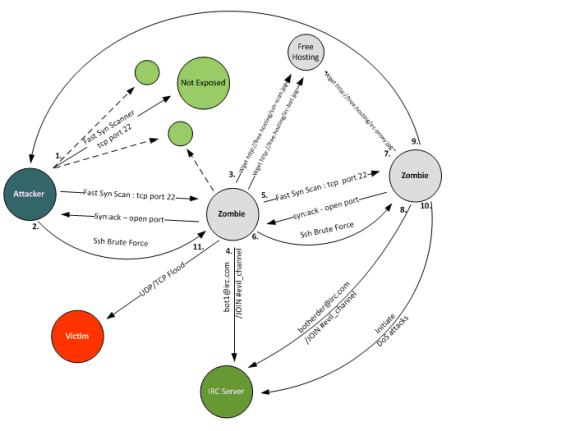 The NATO Cooperative Cyber Defense Centre of Excellence based in Tallinn, Estonia just released a study about the legal implications of passive and active countermeasures against botnets. This investigation is made in collaboration with European Network and Information Security Agency (ENISA). It covers the legal aspects of fighting against botnets taking into account the German and Estonian law.  The study was created by two legal experts, one attorney, two scientists and a post-graduate civil service trainee. It’s very well written and it uses an interdisciplinary language which makes it accessible to people who aren’t specialist in information technology or legal.

It covers a variety of interesting topics such as assuming a system is compromised by a botnet. One of the steps, as part of the incident handling process, is that you might capture and inspect the traffic in order to detect and analyze the botnet traffic. However, from a legal perspective the study presents a variety of legal concerns regarding this. Some of them are personal data protection, unauthorized surveillance and confidentiality of communications. It means such monitoring might be perceived as breach of criminal law.  Even if some of the laws were not written in light of cyber space it still can apply.

Another topic with very unique characteristics and legal concerns is running a honeypot to collect, store and process data to learn about botnets. What are the legal concerns about sharing the data gained from running the honeypot? Or how it can be challenging for a private researcher to prove that the data he is collecting is for scientific interests.  These and other legal concerns are discussed in the study.

How about the takeover of botnets? Which assumes you successful infiltrated the CnC server. If the Botnet is taken over with the intent to eliminate and prevent crime and not prepare one, it still has implications under criminal law. Given the uncertainty of jurisdictional traits on how to handle such situations there is the risk of someone making him susceptible to prosecution. Other topics include: Takedown of Command and Control Servers, Automated Immunization or Disinfection, Botnet Mitigation Techniques under Exceptional Circumstances, Duty to Act against Botnet Attacks and Liability of Owners of Infected Hosts.

Apart of that, through out the study there are excellent reference’s that provide supporting and corroborating evidence of their assertions. Definitely a must read for security professionals involved in incident handling and others.